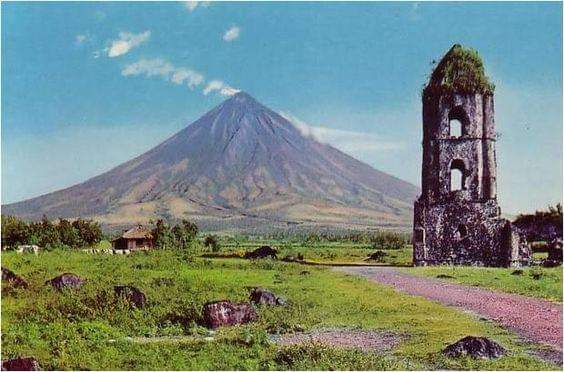 Of all the active volcanoes in the Philippines, Mayon Volcano in Albay province is considered the most active.  Mayon Volcano is in the province of Albay and is known for its perfect form because of its symmetrical cone. Towering at 8,077 feet, it is the highest point in Albay and the whole of the Bicol region.  It has erupted more than 50 times since its first in 1616 and its most destructive one was on February 1, 1814 when 2,200 people perished and buried the town of Cagsawa.  Though people die and crops are destroyed every time Mayon Volcano erupts, it has become Albay’s biggest tourist drawer.

According to legend, Mayon Volcano is the grave of the lovers Daragang Magayon (Bicol for beautiful maiden) and Ulap.  The grave rose higher and higher as the days passed and became a volcano called “Bulkang Magayon” then later shortened to “Bulkang Mayon”.  Magayon was the beautiful daughter of the tribal chief of Rawis, Makusog.  News of her beauty and goodness of heart reached Ulap, the son of the Chief Karilaya of the Tagalogs and Pagtuga, the handsome but arrogant chief of the Iriga tribe.

Magayon fell in love with Ulap and decided to get married after a month.  When word of their impending marriage reached Pagtuga, he immediately gathered his warriors to fight for his beloved.  Ulap and Pagtuga fought each other with Ulap slaying Pagtuga.  Magayon ran to embrace Ulap but was hit by a stray arrow.  While Ulap was cradling the dying Magayon in his arms, Linog, Pagtuga’s henchman hurled his spear at Ulap’s back killing him instantly.  Makusog buried the lovers in a single grave.

Today, when you see a cloud at the top of Mt. Mayon, people are saying that Ulap is kissing Magayon.  When there’s rain, Ulap is crying over their lost love.